Gorgoza Mutual Water Company was incorporated in the state of Utah on July 22, 1977. We are a mutually owned water company that serves the homes, schools, condominiums, multi-family residences and commercial customers in the Pinebrook and South Ridge subdivisions. Gorgoza began providing water to a few homes in the late 1970’s, when the area was first established. As you can see by the aerial photos, the area has grown considerably. We now have approximately 1,600 connections serving an estimated population base of 5,000 people. 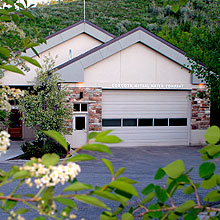 Our distribution system has been engineered to meet the significant demands of our environment and topography. A network of wells, tanks, pumps, booster pumps and pressure reducing valves are required to deliver water to residents separated by over 1,000 feet of elevation change, as well as an interstate highway. We encounter sub-freezing temperatures for much of the year, and drought conditions during the summer are common. Your water is supplied by six local wells and one naturally flowing spring. As such, we are dependent on winter snowpack to fill our underground aquifers and conservation efforts from our shareholders to ensure an adequate supply of water. As a measure of safety, we have established interconnections with Summit Water and Mountain Regional water companies in the unlikely event we have an immediate need for water flow that our wells and tank storage cannot supply, i.e. wild fire or residential fires.

HISTORY OF THE NAME

Legend has it that in the late 1800’s, John W. Young, son of Mormon leader Brigham Young, spearheaded the effort of building a narrow-gauge railroad between Salt Lake City and Park City. After many years of difficult construction and bankruptcy looming, Mr. Young traveled to New York to secure funding to complete his railroad, which proved unsuccessful. While in New York, he heard of a wealthy Spanish nobleman by the name of Rodriguez Velasquez de la Gorgozada. Mr. Young went to France to solicit funding from Gorgozada, who was not impressed with Mr. Young’s initial proposal. As a final effort, Mr. Young presented an intricate set of plans for a make-believe city in the general area where the communities of Jeremy Ranch and Pinebrook are presently located and offered to name the city after the Spaniard, calling it Gorgoza. Gorgozada contributed $1,000,000 to the railroad project, which was completed in 1890. Señor Gorgozada later visited America, rode the railroad, and to his surprise found no city bearing his name. It is unknown whether Señor Gorgozada ever received any return on his investment in Mr. Young’s railroad.

Scott has been with Gorgoza since 2017, but grew up in Pinebrook and even read meters for the company when he attended Park City High School.  Scott owns a heavy excavation company and provides a strong background in utility infrastructure design and installation.  Scott has years of experience communicating with Summit County’s building and engineering departments and provides a valued level of expertise in all construction related areas.

Jeremy joined Gorgoza Mutual Water Company in 2002. Jeremy is a key member of the operations and maintenance team, and has spent many nights and weekends repairing leaks in the system to ensure minimal interruptions to your water service. Jeremy is certified by the state of Utah as a Grade IV water operator.

Shelly has been with Gorgoza Mutual Water Company since 1993. She is responsible for your water account management, and is most likely the person you will speak to if you have questions regarding your bill or payment on account. Shelly is certified by the state of Utah as a Grade I water operator.

Cole started with the water company in June of 2008. He has assisted the other water operators with all aspects of operating and maintaining the distribution system, and has gained a great deal of experience along the way. He is a valued member of the team, and will play a key role in the operations of the company in the future. Cole is certified by the state of Utah as a Grade II water operator, and is also a certified backflow specialist.

Dan Schofield – Board of Directors Chairman

Dan has been involved in the water company since Pinebrook was originally developed in the 1970’s. He worked closely with the original and subsequent developers of Pinebrook to ensure proper construction of the water distribution system that serves the area today. Dan is certified by the state of Utah as a Grade III water operator.